Break up the journey between Patagonia and the Atacama Desert with a couple of days in the Chilean wine region just outside the capital city of Santiago. A handful of small wineries are set in the countryside surrounding Santiago, where you can relax, indulge in fine-wines and enjoy stunning scenery. 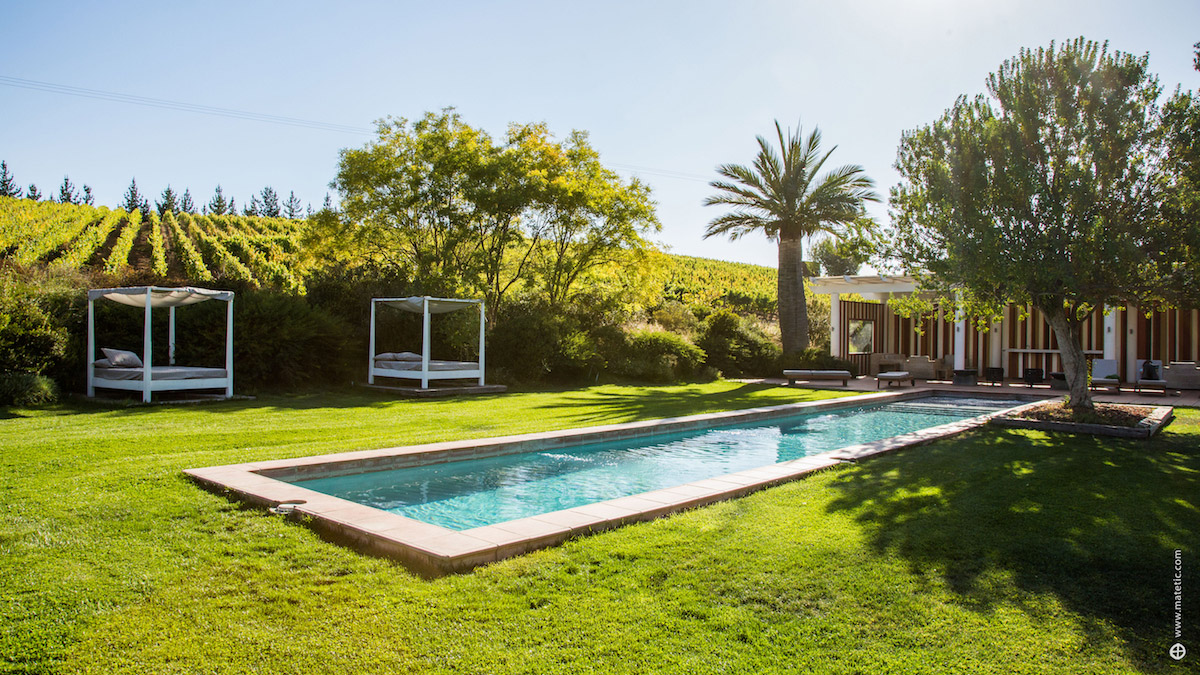 Matetic biodynamic winery is only an hour from Santiago airport, perfect for either lunch & wine tasting between morning and evening flights, or for a few nights’ stay at charming boutique hotel, La Casona. There’s plenty to do from wine tasting to horse riding through the vineyards with the Huasos wearing traditional ponchos and straw hats. It’s great for families, unlike many wineries – they put on grape juice tastings for the kids, and the bikes have kids’ seats so you can go on family bike rides and enjoy picnics in the vineyards. You can also explore art galleries and historic buildings in the colourful harbour town of Valparaiso, just 40 minutes away. 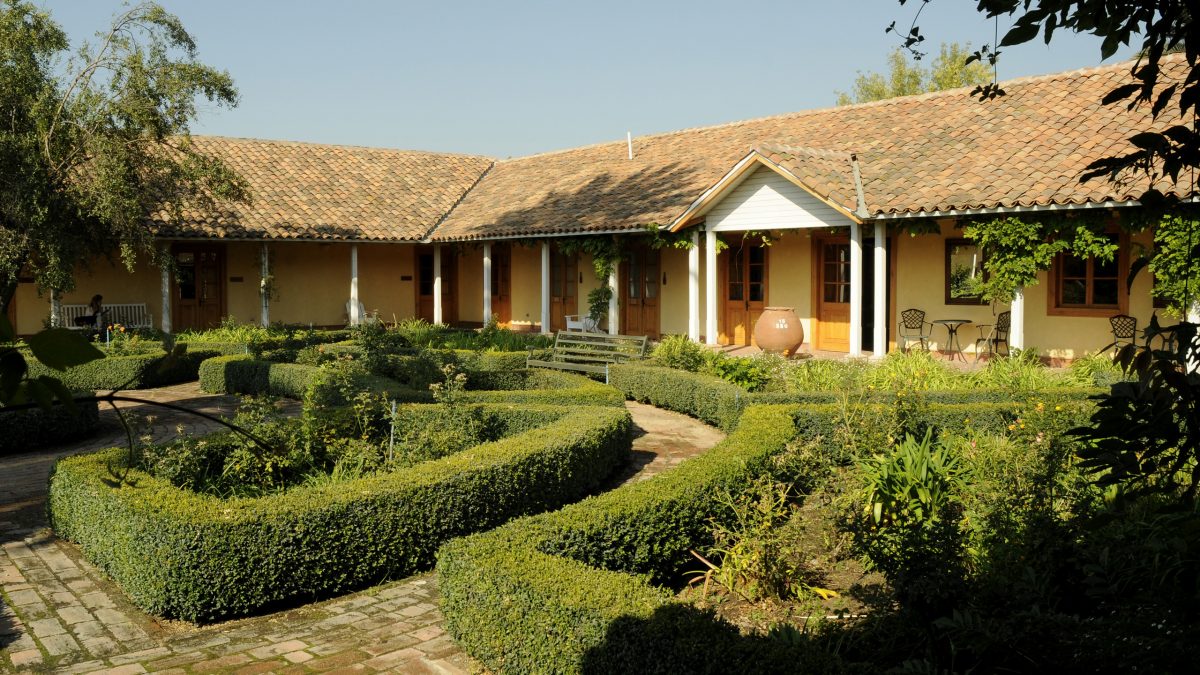 We interviewed wine expert Alex Tilling to uncover the kooky but effective methods used in biodynamic wineries, at the same time as tasting our way through Matetic’s delicious fine-wines (obligatory research) – check out our tasting notes below!

As a biodynamic winery, how does Matetic make wine differently?
The whole concept of being biodynamic is that you are encouraging the vine to be self sufficient. You want it to work in conjunction with the rest of the farm from the soil to the worms, ducks, geese, whatever you have. We’ve mono-farmed for so long that vines are no longer capable of fighting off disease or dealing with drought. They’re like a small child that’s been locked in a sanitised room and then you let the child out and it’s going to get very ill very quickly. So it’s taking organics i.e. not using herbicides, fungicides, pesticides – but then it’s taking it a step further to look at the natural rhythms of the earth. It can all begin to sound a bit funky – with the cycle of the moon you’ve got push and pull currents, so there are certain times of the month when the vine is really good at growing; all the energy comes out into its tips, its leaves and grapes. And there are other times when it just shuts down on itself and its energy is all in the roots. Now if you were to pick the grapes when all the energy is in its roots vs. when all the energy is in the grapes, you’ll actually end up with two quite different grapes in terms of quality. It’s really understanding natural rhythms to ensure you get the most flavour, the most energy out of the grapes and into your wine, as well as promoting incredible health. 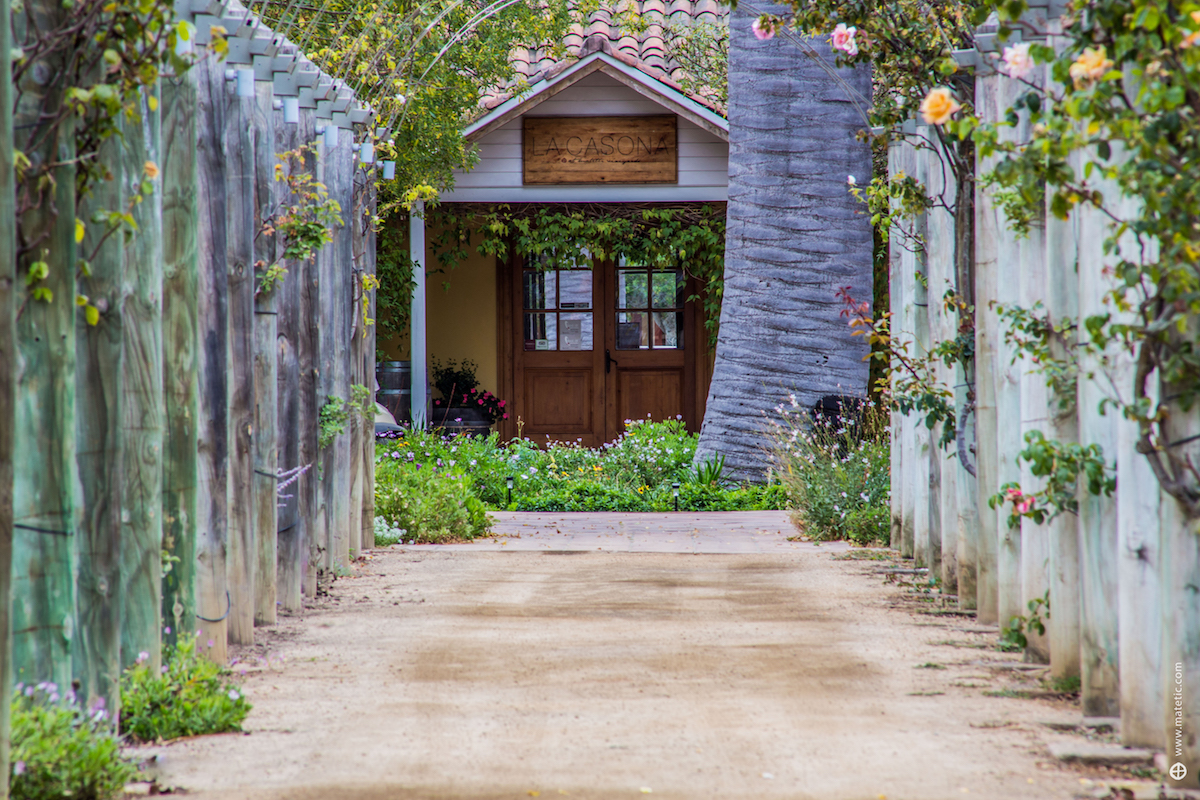 We’ve heard that Matetic uses llamas and chickens instead of tractors on the vineyards?!
Yes, exactly! Alpacas are the local lawnmowers; eating pests, and certain ducks, chickens and geese will be going after some of the bugs. If you’ve got a bad bug, you want to make sure its natural predator is there to control it. So instead of being a human and thinking, oh I don’t want that in my vineyard I’m going to kill it, it’s saying, hang on a minute – what’s the natural food chain and what can be encouraged in this vineyard? Paula Cordones is the head wine maker at Matetic – they harvest and sort the grapes by hand for the purest result.

How are Matetic pioneering sustainability in wine making in Chile?
In Chile they are pioneering in a lot of ways and they’ve been doing it for quite a long time. Everyone said it’s far too cold to grow grapes where they are – but they were on to something and were the first people in the Rosario Valley to start growing grapes. It was the family that decided they wanted to work organically and then progress into biodynamics, so they brought consultants in to show them how. There are a lot of complex processes; you need to get a cow horn and stuff it with a certain type of manure and it needs to then be buried for six months in a certain part of the vineyard. You have to dynamise it, stir it seven times anti clockwise… And that’s when people begin to think, hmm… sounds a bit warlock and wizard style! So it’s a very complex process, based on Rudolf Steiner’s biodynamic processes. 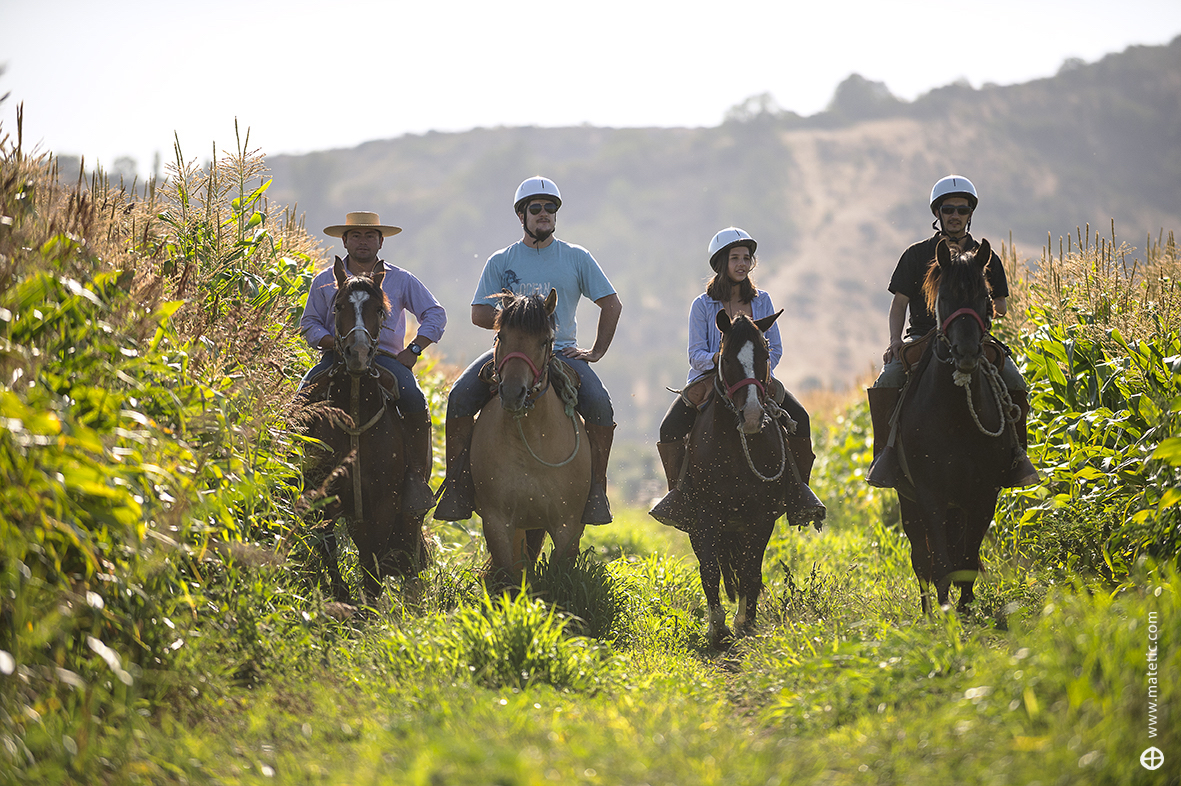 What conditions lend well to growing vineyards in Chile?
It’s all very easy to say everyone should be biodynamic. You think of Chile as being generally quite hot, but they’re right on the coast, so you get this really cold fog and wind coming in, and if you are in an area of high rain fall you’ll be at threat to a lot of rot in your vineyards and could lose a lot of grapes. Everything has to be balanced with a commercial aspect, so you do need to have quite a special microclimate. Because Matetic are so coastal, if they have rain the winds will come in and dry the grapes out, so they rarely get any rot. If you’re not at threat of summer rainfall when the grapes are on the vine, then you’re in a much better position to be encouraging your vines to be biodynamic. 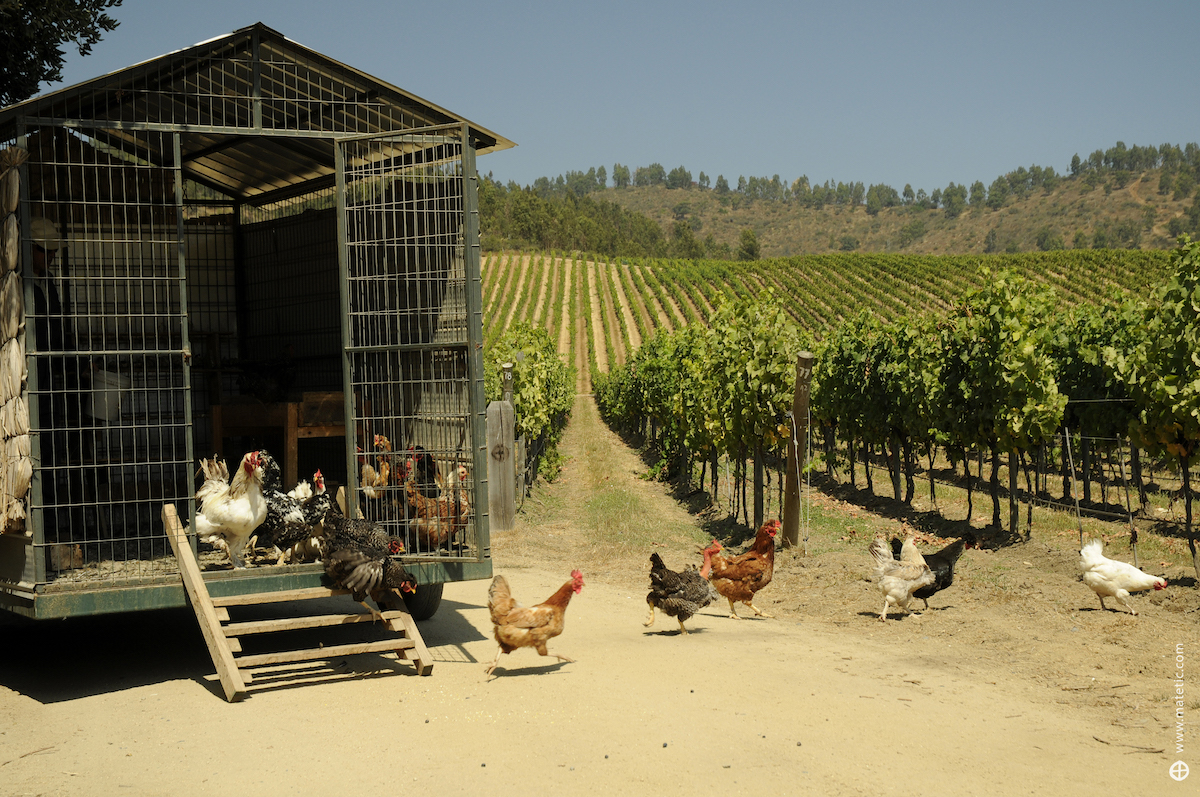 There are so many factors to consider…!
So many people look at wine and think it’s like beer or whisky, where even though a lot of love and thought goes into the composition of it, it’s very easy to make in the composition of the environment, and vintage variation doesn’t really factor in. Look at Burgundy, a small area in the north of France – the last five years they’ve been hit by frost and hail, they’ve had their crop reduced by between 40-90 percent each year. People wonder why the has price gone up and don’t want to pay more. But you look at these guys and how much goes into it… It’s less extreme in New World countries but in really marginal climates, it’s a real pioneering, thankless pursuit. 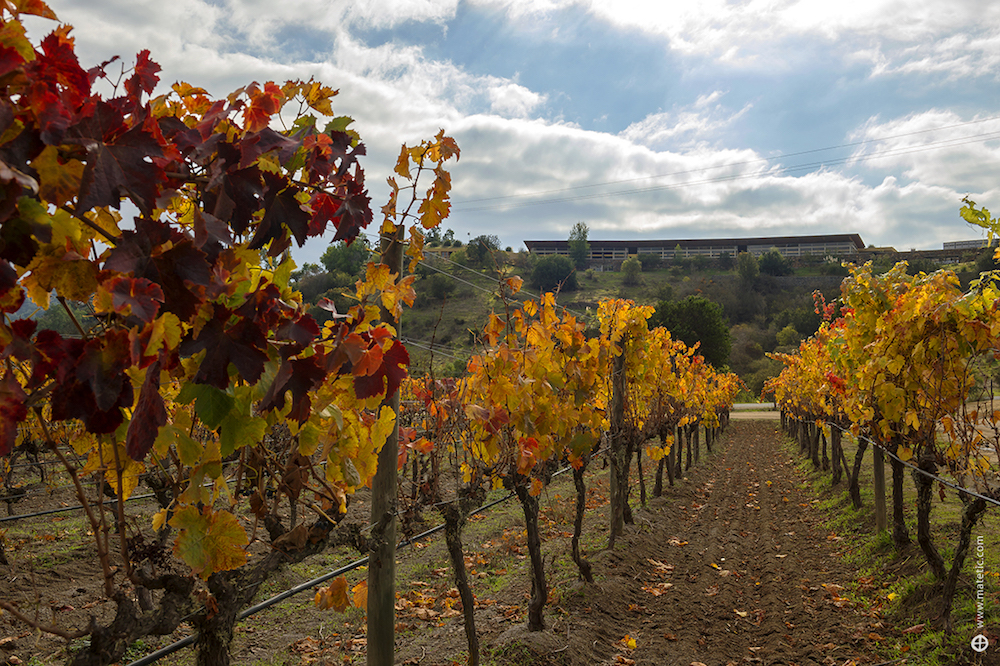 What goals are Matetic trying to achieve with their wines?
They are always looking to progress. Their big thing has always been Syrah and they’ve won a huge number of awards for this. But they’re also pioneering other cool climate and aromatic grape varieties that people said couldn’t be grown in Chile: Pinot Noir, Gewürztraminer, Riesling – grapes people associate with Germany. They’re one of only a handful of people who are working organically and biodynamically and are absolutely dedicated to quality. They don’t want to try and encourage more grapes from the vine than the vine wants to give. The older a vine becomes the less grapes it’s going to produce, but the more intense the flavour is going to be. In Chile you have a lot of producers whose main aim is volume rather than quality, so they are irrigating constantly, which get’s the berry to blow up with water and the flavours are slightly diluted, but they’re able to get a lot of litres. For so long consumers have viewed Chile as cheap Merlot or Sauvignon Blanc from the bottom row of the supermarket, and they can’t understand that now Chile is capable of that quality, and of course because Chile doesn’t have the reputation, it’s actually massively over delivering at that price point. So it’s slightly the consumers undiscovered secret in terms of really pushing the boat out and getting something extraordinarily good. That’s what they’re pioneering – unreserved dedication to quality and proving the heights that Chile can go to. 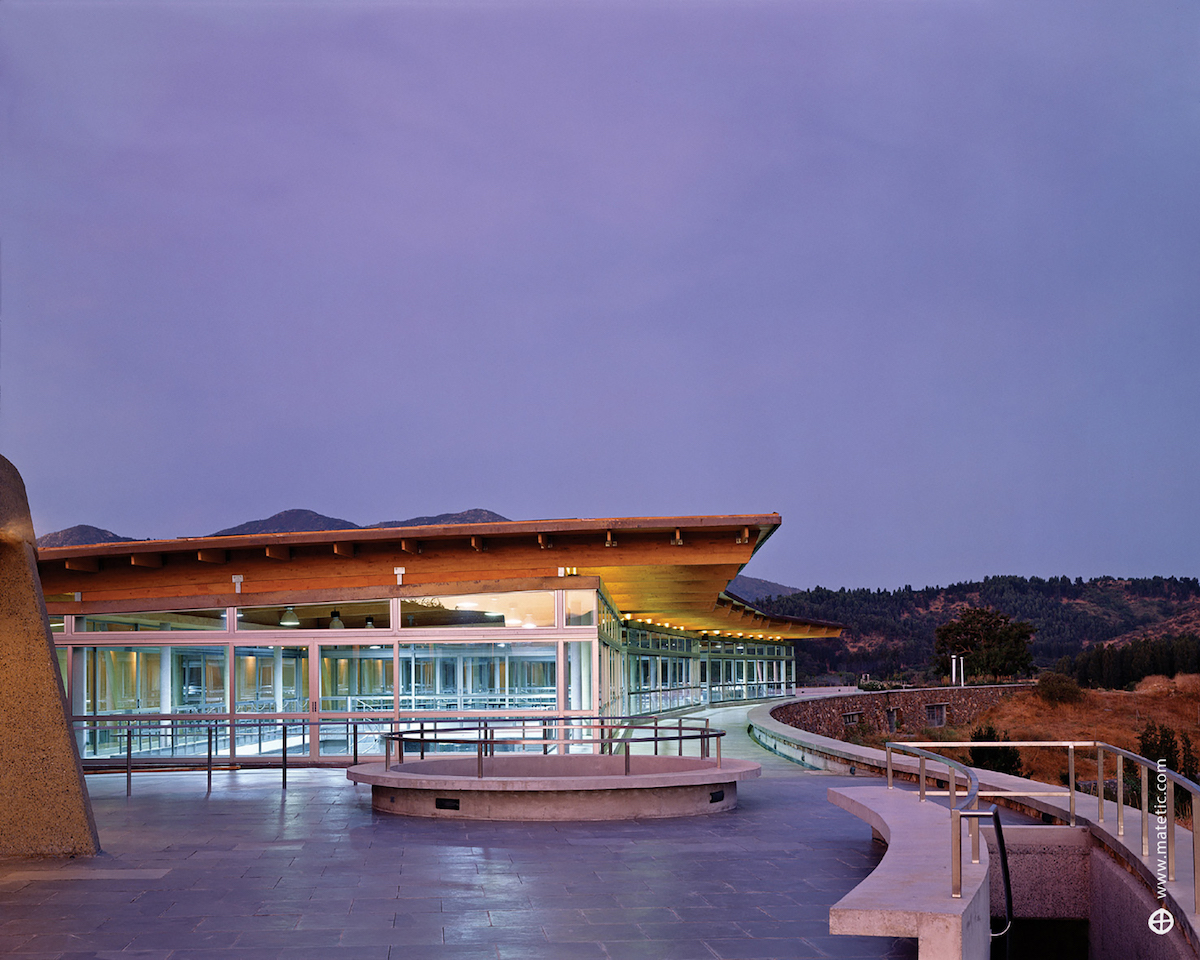 For anyone travelling to Chile, are there any ‘must-try’ wines?
If you’re looking at a really good classic expression of Chile: Carbernet’s, Carmenere’s, quite a rich, fruit driven wine. There’s a wonderful wine called Perez Cruz; really fresh but so voluptuous, rich and intense, and they’re from quite a high altitude, so they’ve gone up high to get this freshness into their wine. There’s an area called Itata – they’re doing some really exiting things with old vines called Cinsault, a red grape variety made in a really juicy way. And there’s a local grape variety called Pais, which was always considered the work horse of the wine industry – they made bulk wine out of it and never tried anything else. Now some of these wine makers are looking at old pockets of vines that people have been slowly pulling up as they’re not producing enough wine anymore, going, hold on, they’re producing amazing quality grapes! So Cinsault, Pais and Carignan – it almost doesn’t matter who the producer is – look for those grape varieties as the really exciting front line of Chilean production. 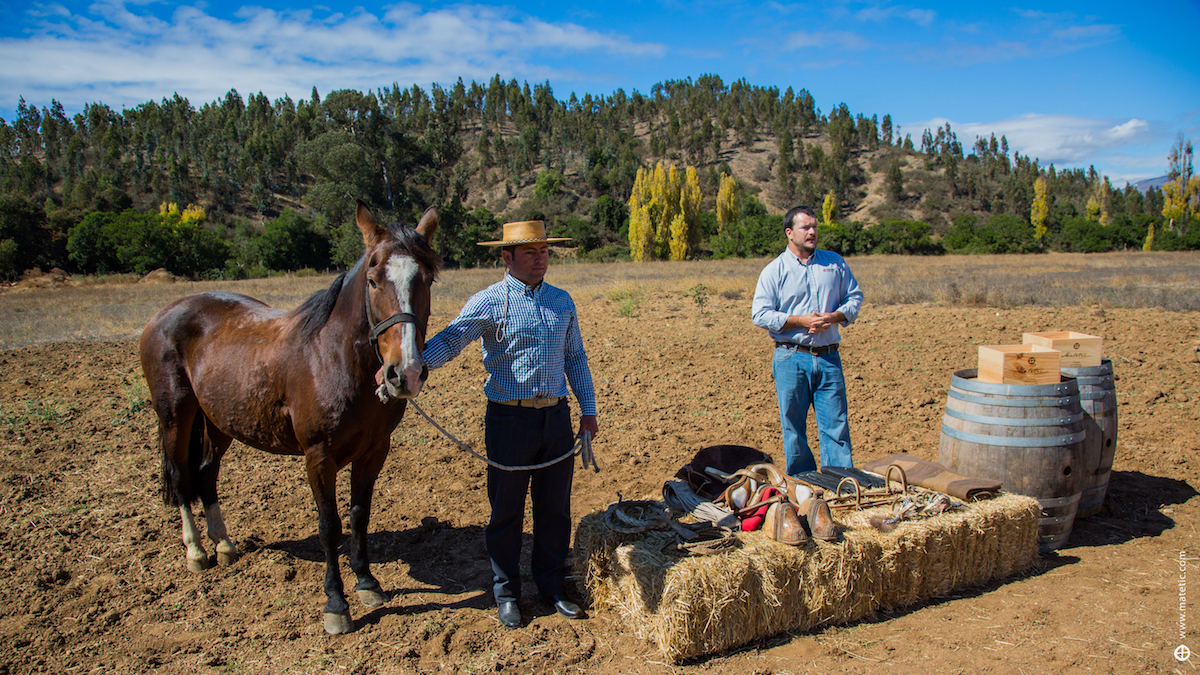 What’s in your dream wine cellar?
Oh my God – everything! I’m a mood drinker. Lots of people have their one favourite wine and they always return to it. If I’m tired and feel like I need comforting after a stressful day, I’ll want to drink something quite soft and round and rich. Whereas if I’ve had a really amazing day and I’m really excited about it then I’ll want to drink something a little bit racy like a Riesling. Obviously I’d have Matetic in my cellar – I’d have all the cool Chilean pioneers for my funky Saturday lunchtime kind of wines. I’d definitely have a lot of German Riesling; I’d have some Northern Rhone – they’re doing Syrah in a similar style to Matetic (or vice-versa) – they’re the benchmark Syrah producers. How much am I allowed! I’d have a lot of White Burgundy – basically I’m not fussy! 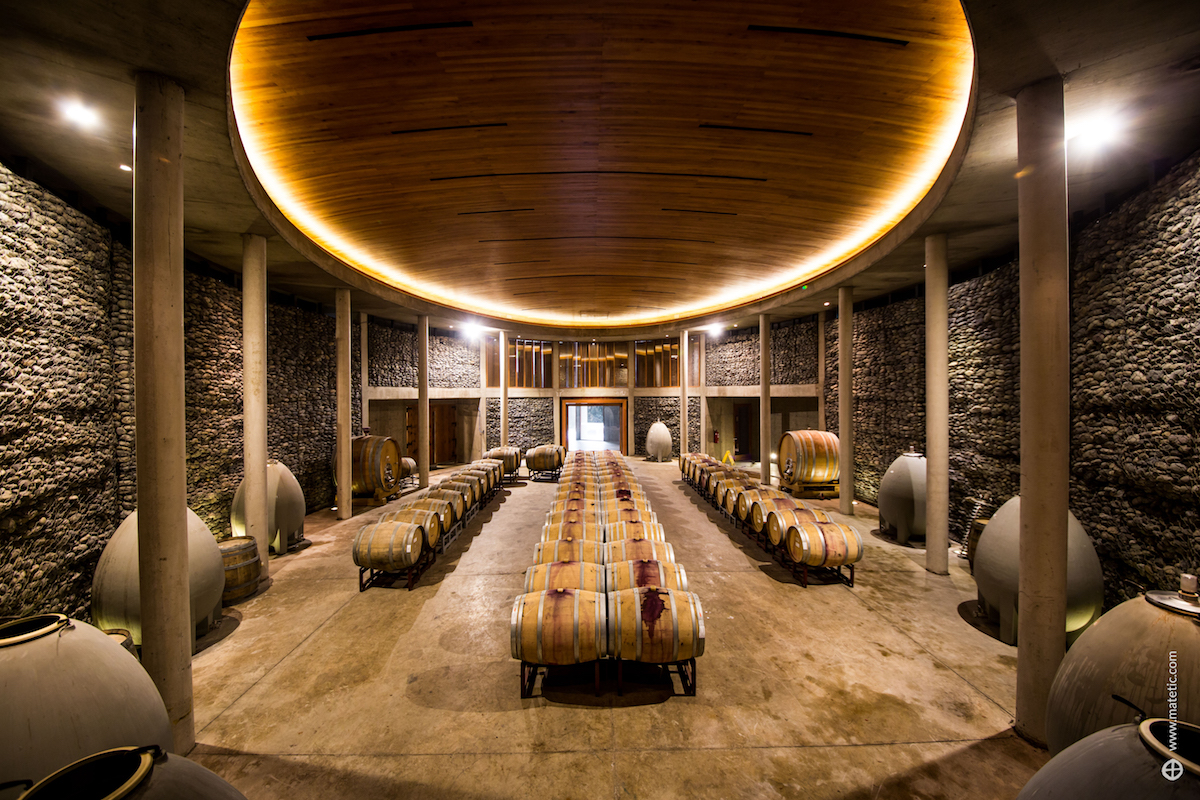 ‘There’s no such thing as a bad wine taster – it’s all about building up a memory bank of daily tastes and smells and connecting those together.’ – Alex Tilling 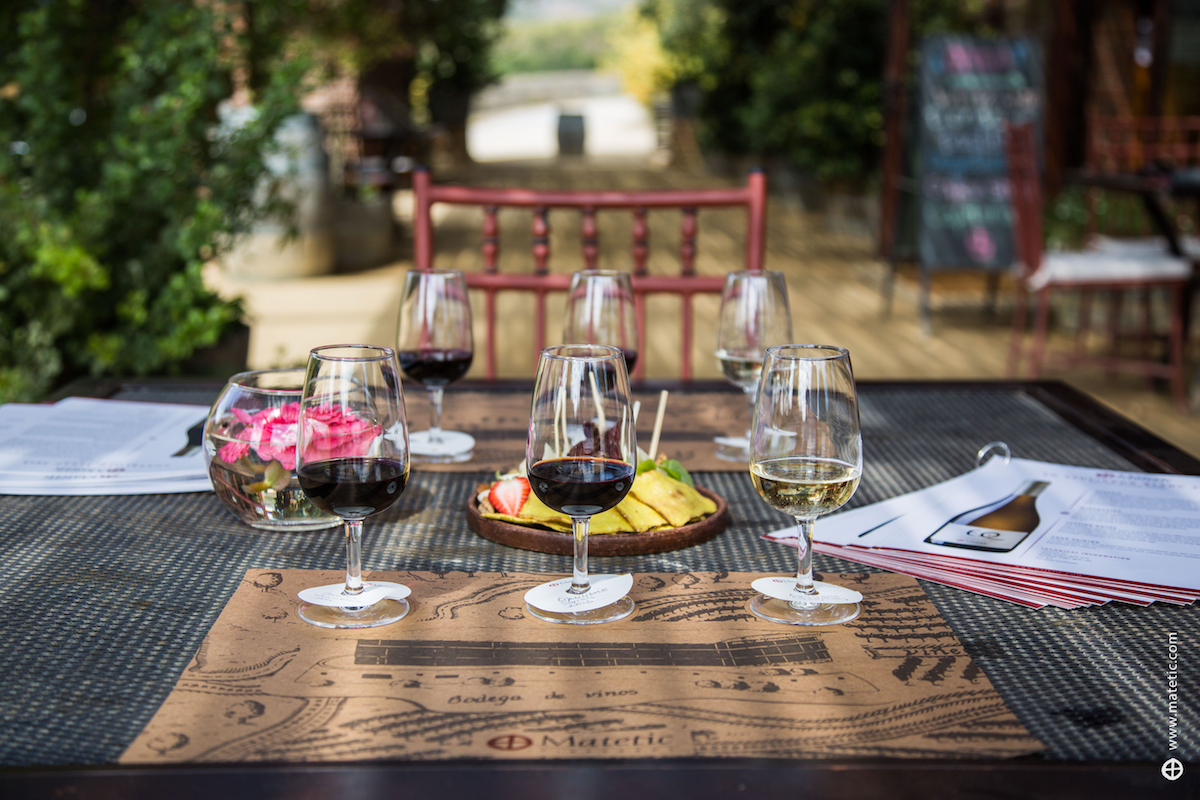 Coralillo Gewurztraminer 2015, San Antonio Valley
This is wonderfully vibrant; an earlier drinking wine. Rose petals, very crisp and un-oaked. It is usually a low acid grape but it is made in a surprisingly crisp style at Matetic. Bone dry with no residual sugar – great for food pairing. It’s also a little spicy with a hint of orange peel! A special wine with a climactic influence.

EQ Coastal Sauvignon Blanc 2015, Casablanca Valley
More of an aromatic wine, a bit like a New Zealand Sauvignon. It’s a step up from the first wine; very balanced and nothing’s been sacrificed in the acidity. It’s quite vegetal and reminds you of sugar snap peas or nettles. Great with risotto/ spring veg/ tomatoes. It’s a much richer, bigger and more flavourful wine than the Coralillo, so even better for food pairing and it’s got a longer flavour. It’s got that lime-sherbet zing?!

EQ Pinot Noir 2012, Casablanca
This grape can be very unpleasant when unripe, so getting plenty of sunshine and wind is great to bring out more red fruit flavours and it’s quite under-growthy – reminds you of that smell when you’re on an early morning walk. Saddle leather, fresh acidity, dry figs, jammy fruits – goes really well with fatty foods like duck as it cleanses the pallet. This level of wine from Burgundy would be £40, whereas this is £20 just because it’s from a very undervalued region in Chile.

Coralillo Cabernet Sauvignon 2012, Maipo Valley
Makes you think of those Ribena berries – so vibrant and energetic! Blackcurrant, more tannin, licourice. It’s too cold at Matetic to grow this so the vineyard is further inland for warmth. 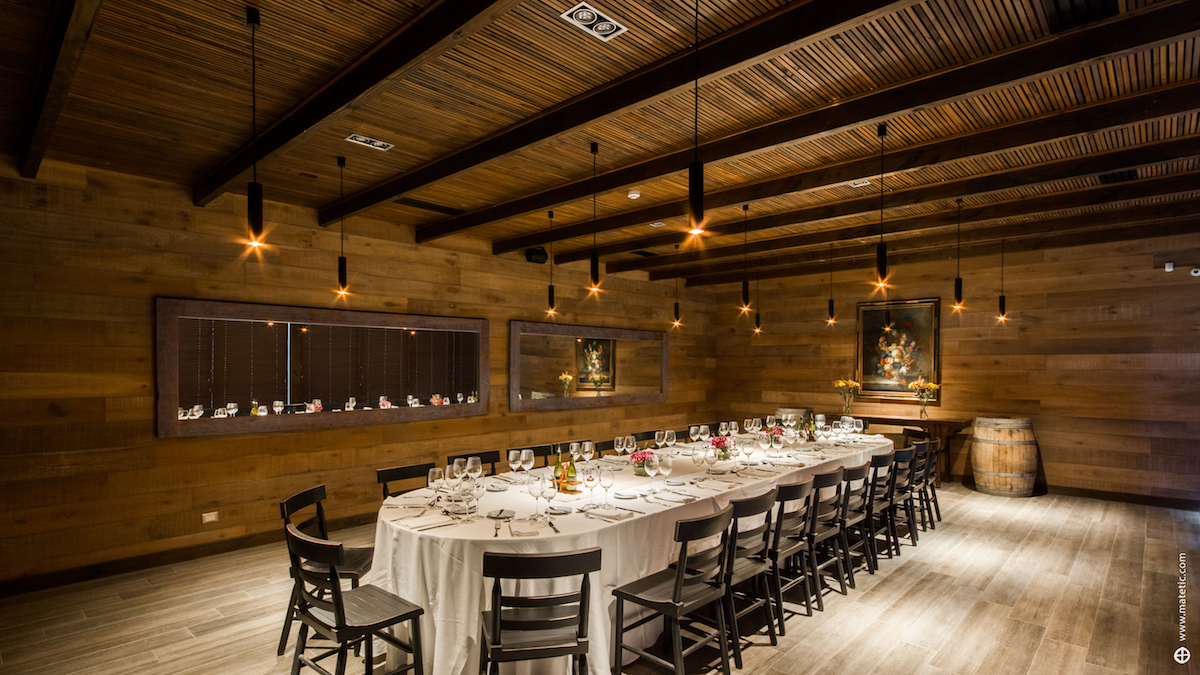 If you’d like to try Matetic wines in the U.K. we can arrange a delivery and even organise a private tasting – the perfect treat for your friends to get excited before you jet off on a trip to Chile, or to reminisce on your return home.

FIND OUT MORE ABOUT CHILE