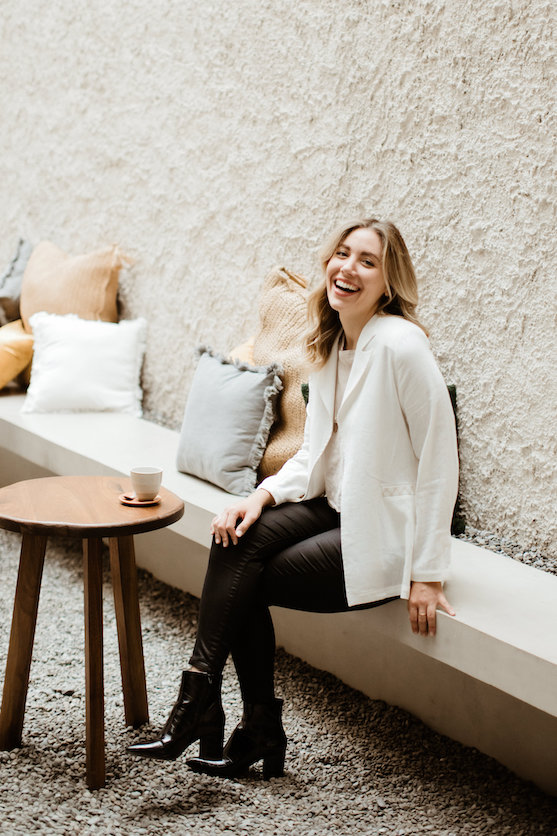 I grew up in South Florida, and I’ve been living in Mexico for three years.  I write for T: The New York Times Style Magazine, Condé Nast Traveler, Travel + Leisure, and Vogue, amongst others.  I also have my own content consulting business, working with hospitality companies on their websites, social media channels and general communication.  I will forever and always be passionately curious.  One of the reasons I moved to Mexico in the first place is because I was so fascinated by the culture. My curiosities about travel and culture extend to health and wellness. I am currently studying to become an Ayurvedic Wellness Coach, and I love learning more about Divine Feminine teachings. When I’m not reading or writing, I am often in the woods or at the beach.  I love being active, especially hiking and kayaking. What I’m most excited about right now is for my debut novel, which will published at the end of this year. It’s a fiction thriller based in the art and architecture world of Mexico City.

You’ve been exploring Mexico for a while now.  Which are your favourite areas of the country and where is next on your list?

There are so many worlds inside of Mexico, with each state so diverse and different from the next. But, out of all of them, Oaxaca and Yucatán are my favorites. The rich artistry and food traditions in Oaxaca light me up. I love that there are so many cultures represented, with almost each valley and town having their proprietary art form and cuisine.  Yucatán, on the other hand, feels like a mythical oasis. The Maya is very much a living culture. I love studying their ancient cosmology and how it plays out in everyday life. I also find the architecture mind-blowing.  It’s amazing to stand before sites like Uxmal and contemplate the foresight it took to develop a place so beautiful and detailed.

Tell us about some of your favourite bars and restaurants in Mexico City. What does a typical ‘noche
chilanga’ look like?

My typical night out looks much different these days. But I have fond memories of going to the omakase-style dinners at Emilia by chef Lucho Martinez.  Across the hall from the second-floor restaurant, there was a vinyl bar called Tokyo Record Bar. The combination of an elegant Japanese-Mexican meal followed by craft cocktails and old-school records really did it for me.

Imagine you’re designing a friend’s 2-week honeymoon. Where might you send them?

I would start with a stay in Mexico City at a hotel like Octavia Casa, Circulo Mexicano or Ignacia Guest House.  My friend Rocio runs an incredible business called Eat Like a Local. She hosts my favorite gastronomic tours of the city in the best markets, and she’s a walking encyclopedia of the country’s food diversity. And you can’t miss dining at places like Meroma by chef Mercedes Bernal and Maximo Bistro by Eduardo Garcia. I also suggest tours of a variety of Mexico’s cultural gems: Casa Gilardi by Luis Barragan, Casa Luís Barragan, El Nido de Quetzalcoatl by Javier Senosian and Museo Anahuacalli by Diego Rivera. But by far my favorite museum in the city is Museo Nacional de Antropología. If you write them directly, you can arrange a private tour of the museum at night. It’s so magical! After some time in the city, I would suggest heading to Oaxaca, with the first in Oaxaca City for a stay at Hotel Sin Nombre, Grana B&B or Escondido Oaxaca. I would tap Thread Caravan for private textile tours, mezcal tastings and ceramics classes and enjoy dining at breakfast spot Boulenc Pan and Enrique Olvera restaurant, Criollo (unpopular opinion: I think Criollo is better than Pujol). Then I would head to the Oaxacan Coast on a quick, 45-minute charter flight (don’t drive—trust me). There are tons of options here, from hotels like Hotel Escondido positioned right on the water to private homes with their own rooftop observatory like Casa Cosmos.

What is your favourite building in Mexico City?

I adore the architecture in Mexico City, especially the explosion of modernism that took place in the early 1900s. Entire neighborhoods such as La Condesa are a time capsule to styles like Art Deco, while the work of Mexican architects Luis Barragán and Mario Pani, and foreign transplants such as Felix Candela and Mathias Goeritz can be seen in many neighborhoods throughout the city. But if I had to choose one of my favorite buildings, it would be Casa de las Brujas in Colonia Roma. It was built by British architect Robert Pigeon in 1908, and is a great example of eclectic architecture, a mix of both Romanesque and Gothic Revival. But the real reason I love the building so much is for its spooky history. It’s rumoured to be cursed, as it was once the site of the infamous ceremonies of Barbara “Pachita” Guerrero, a shaman who claimed to perform rituals and psychic surgeries while inhabiting the spirit of Cuauhtémoc, the last emperor of the Aztecs. Now the ground floor is home to two of my favorite establishments bar and eatery: the cocktail bar, Brujas, and European-style bistro, Pigeon.

Through our wonderful partners at Vellum Libraries, we always send relevant books to our clients ahead of their trips. What should we all be reading and watching before a journey to Mexico?

To better understand the legacy of modernist architecture in Mexico City, I would suggest a book like The Life and Work of Luis Barragán by Jose Maria Buendia Julbez and Juan Palomar. For history nerds like myself, I adored reading Mexico: From the Olmecs to the Aztecs by Michael D. Coe. It’s an easy deep dive into the ancient cultures of Mexico. For fiction, the new novel Mexican Gothic really captures how legend and lore infiltrates every aspect of life in Mexico.

Teach us some useful Mexican slang.

I’ll forever admire how many ways there are to say something is “cool” in Mexico: que chingón; que chido; que padre (which literally translates to ‘how father’), to name a few. Another favorite is a huevo. This actually is referring to eggs, huevos, but it translates to a deep sense of agreement and excitement that can best be understood as saying a more vulgar form of “hell yea!” Also, as a head’s up. If someone says I’ll see you ahorita, in a little while, or if you’re making plans and they agree and follow it with te aviso, I’ll advise you, then be prepared for the following: wait way longer than you had anticipated and be stood up because you do not have plans and that was a nice way of them declining without being upfront and final.

Tell us about one of your most memorable experiences in Mexico?

When I was working on a consulting project for a group of private haciendas in the Yucatán, I was tasked with recording each of the hacienda’s history and capturing the essence of each of the brand’s experiences. I got to tour over 20 haciendas throughout the region, documenting their history and photographing each of them. Some even had Maya pyramids on the premises (I had the fortune to participate in a shaman-led clearing ritual atop one of them). The experience felt mystical, and I’ll never forget how it felt to learn about the Maya’s ancient and living food systems and explore their sacred spaces like underground cave systems and cenotes.

How do you feel Mexico’s hotels score on sustainability? Any standout examples to highlight?

I wouldn’t say this is Mexico’s strong suit but this is slowly changing. There are standout examples like the regenerative retreat Playa Viva in Zihuatanejo and the new Paradero in Todos Santos, which is host to an organic garden with a mission to reintroduce indigenous species of edible plants to Baja California Sur. And, by far, one of my favorite experiences is a stay at the open-concept Casa Etérea, an off-grid home built in the hills outside of San Miguel de Allende.

What are the best Mexican souvenirs?

My favourite souvenirs are handmade ceramics. A few of my favorite providers and brands are Utilitario Mexicano, Colectivo 1050º, Hacha and Encrudo.