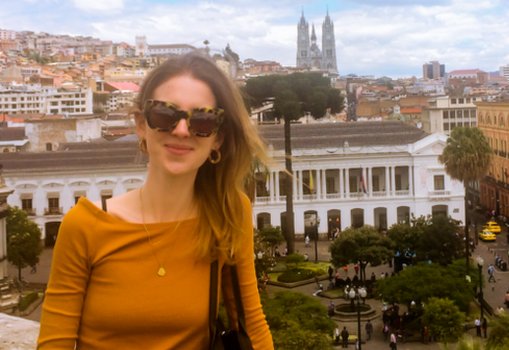 British journalist Lucinda Elliott has worked as a foreign correspondent across Latin America, reporting from the frontline in Venezuela during 2017. She then moved to São Paulo, Brazil later reporting from Rio de Janeiro throughout the coronavirus pandemic. Her work across print and radio plays a key part in foreign coverage of affairs in Brazil and the wider South America region. Outside her time scouring the headlines, she goes story hunting. Finding the best new hotspots, understanding trends and keeping an eye on who is going where, to report back.

Your work as a foreign correspondent has taken you to some interesting places.  Have there been any hair-raising moments?

One hair-raiser has to be in French Guiana when I took part in their annual carnival masked ball. Women come dressed as the queen of carnival, the Touloulou, and are entirely covered from head to toe in colonial-style costumes so potential suitors don’t know who they are dancing with. I remember taking off my silk, arm-length gloves to send a text message (if you’ve ever attempted to do this with gloves, it’s impossible) and everyone immediately stared as if I’d caused huge offence. Luckily, a mask covered my face, so the subsequent day when I had to conduct interviews they didn’t know it was me who’d insulted the crowd.

Tell us about your life in São Paulo, what made you move there?

The presidential elections were coming up and I had the opportunity to travel from Caracas to interview two-times former president Lula da Silva. Back then it still looked like he was a potential candidate, before he was imprisoned and barred from running. When our meeting was over and the piece filed, I decided to stick around. That was two years ago now. The news hasn’t stopped.

Where do you like to eat and drink in São Paulo?

I’ve been lucky to have had the chance to report on several neighbourhoods in São Paulo as part of Monocle magazine’s retail and dining pages. Santa Cecíia is buzzing at the moment with bars, restaurants and unfussy cafes. Caracol – where the owners are a laid-back team from Rio de Janeiro – has got the dining drinking combination just right. A sweeping bar, decent drinks, DJ-sets and a street food inspired restaurant out back to enjoy the warm southern hemisphere evenings.

If you’ve just arrived, go to a boteco, Brazil’s version of a pub. There’s one on every street corner. Order a beer to be shared in small glass cups and people watch.

Where do you feel happiest?

When I meet someone who reveals a top story idea, unintentionally. Then I keep it secretly to myself while asking more questions. It’s like a light bulb moment that is hard to replicate. There have been times when I’ve frantically scribbled notes on toilet paper in the ladies loo.
Sitting round a table in good company with good wine should never be underestimated. It happens a fair bit I’m happy to say.

What do you miss most from the UK and what luxuries do you smuggle back to Latin America?

Draft cider. Instant hot chocolate. M&S knickers. Squeeze from my younger sister. Dulce de leche (DDL as we call it in my family. Preferably from a Uruguayan supermarket – I was thrilled when I discovered they sold it in Venezuela). Banana passa (mini dried bananas from Brazil). Caldo de feijão (like a stock cube but for Brazilian bean stew but you can buy it in London now so…)

Which place will you always return to?

Montevideo. I’m half Uruguayan so I’ll be going to endlessly renew documents in person for a lifetime.

In South America, Suriname. I was kicking myself for not making the trip over this year from French Guiana. There are sizeable Javanese, Chinese and Vietnamese communities in the former Dutch colony and I’m fascinated by the ties our region has to the Far East.

I find it too tempting to try “holiday-ing” in South America. There’s always an article to write or interview to nail. This month I am going to New York to gallery hop and buy some decent tech equipment and affordable well-fitting underwear! High import taxes are a real issue south of the equator.

What book would you recommend to a first-time traveller to Brazil?

If they can read Portuguese, a novel by Machado de Assis. Dom Casmurro is one of the first books I read right the way through in the language and is all about a jealous husband – perhaps handy when trying to assess the dating scene on a trip to Brazil. Almost every Brazilian would’ve read it in school.

LatAm guru, Michael Reid, wrote a very good book around the time of the 2014 World Cup titled ‘Brazil: the Troubled Rise of a Global Power’. It really fills the gap with a proper English-language history of the country.

What do you listen to when on the road?

Mainly long voice messages from relatives who I haven’t had time to call for a decent chat between reporting. I so enjoy hearing a familiar voice, especially when a little anxious about arriving at a new destination.
Monocle24 radio for foreign affairs updates. My friend Emma Gannon’s podcast, Ctrl Alt Delete. She’s become a bit of a celeb but we started out in journalism together. She gives great interviews and makes me laugh. I’d recommend her weekly business column in The Times.

What do you never travel without?

A decent pen that feels heavy to hold. I once attempted to use a hotel biro freebie for three days of interviews. Never again. Multi-plug adapter is an obvious one but essential. Suncream, any brand will do.

Where have you been based throughout the pandemic?

I was in the middle of a street carnival party when the first case of the virus was officially announced in Brazil. From there I spent much of 2020 in Rio, a city that due to its geography and informal economy meant a lockdown was impossible to impose. Those who could stay home, did. Millions more couldn’t. The main beaches however were off limits for nine consecutive weeks through to May – incredible scenes of an empty Ipanema – but since then life has returned to normal despite the mounting caseloads. From there I made my way to Spain for several months before returning to the region this year.

Uruguay is only open to nationals and residents which has left this southern hemisphere summer feeling wonderfully quiet. The first thing that stood out to me on arrival to the capital Montevideo was how respectful people are despite no official lockdown ever being introduced. Keeping their distance, particularly when on the beach or in the supermarket. It’s been a relief to be able to interview people in person! Uruguay is managing the pandemic better than any other country in the region, helped in great part by its size. Roll out of the vaccine began in March and given the minute population of three million, i’m likely to get mine soon.

First stop is José Ignacio, a beach town on the eastern coast of Uruguay. Then i’m keen to head to Paraguay, a country that’s rarely covered and that I enjoy visiting. Towards the end of the year Chile hosts a presidential election, so I’ve got my eye on a few stories from Santiago. Best get myself a jab first.