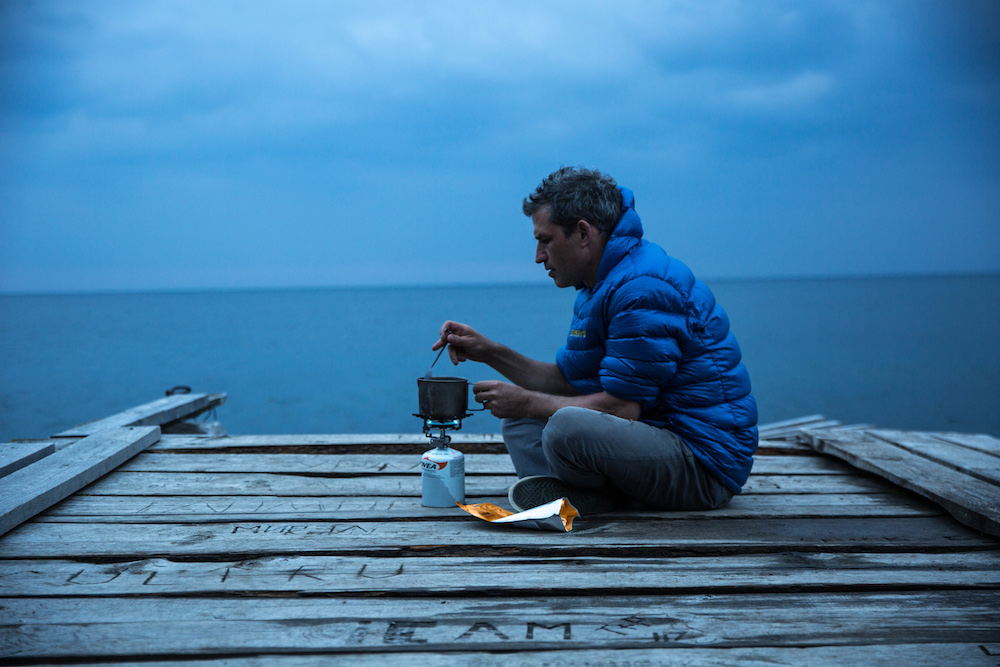 Outdoor expeditions need no longer be marred by the thought of bland mush to sustain you. Camping food’s image has been turned completely on its head with FIREPOT’s slow-cooked, light-weight meals inspired by outdoor adventure and designed with the explorer in mind (‘It’s about time!’ – we hear the adventurers cry). A small team in Dorset make every meal themselves using fresh, local produce. Having swiftly garnered a stellar reputation in its first year, world-famous explorers have declared FIREPOT their ‘go-to’ meal for taste and nutrition, with Alan McIntosh saying “It packs a serious fuel and flavour (think morale!) punch for the hill, hut or tent.” We interviewed founder John Fisher to find out the inspiration behind FIREPOT, some first-hand tasting notes and to discover the weirdest foods he’s tasted in the wild….

**ENTER THE FIREPOT COMPETITION BELOW** 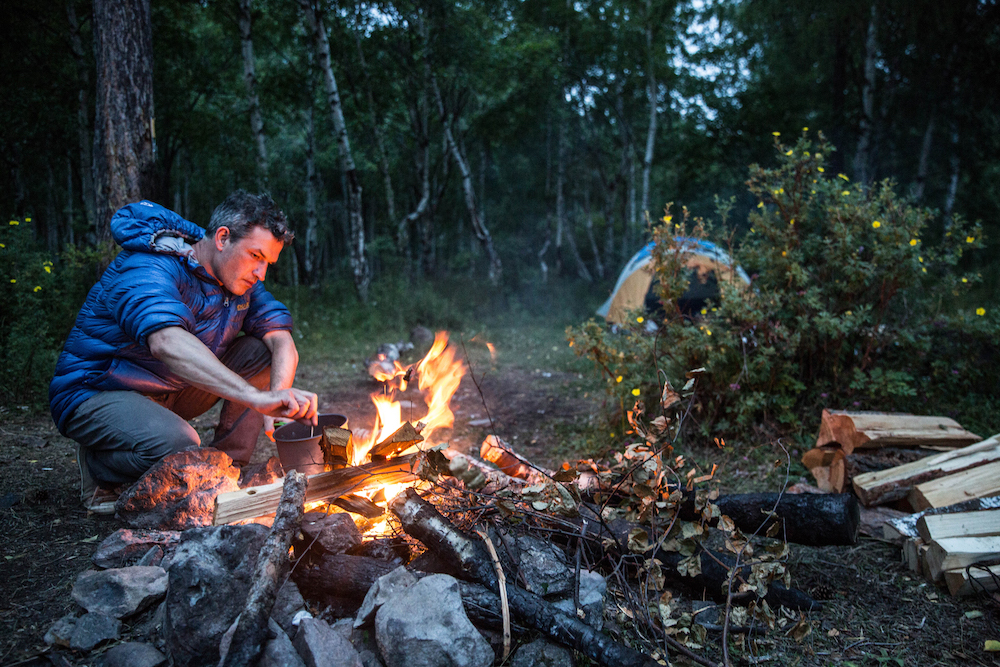 What were you doing before you founded FIREPOT?

I ran my own company for 21 years, building websites for travel companies. After selling the company last January and ready for a change, I worked in Nepal for six months for a company that hand-makes cashmere scarves for Hermes – weirdly different from my last job – sourcing cashmere in Mongolia and then weaving it in Katmandu, Nepal. I was also renovating Edmund Hillary’s house (the first explorer to reach the peak of Mt. Everest), which is owned by the manager of the cashmere company. With the red tape in Nepal, it’s very much an ongoing project, but a fascinating one. I then ran a wilderness camp in Mongolia for a few months, so it was a quirky 2016 – a stopgap whilst finalising FIREPOT plans.

What fuelled the FIREPOT concept?

I’d been planning FIREPOT for five years before launching. I’ve travelled a lot with my wife who’s a travel journalist, often to extreme places like Siberia, Patagonia and Mongolia. Five years ago I went on a trip to Greenland, flying into the south-west and hiking unsupported for 10 days until we reached the next airport. There were no roads, no people, no shops. And we carried our own food the whole way. I’m a real foodie and pretty obsessed, so I spent weeks testing out all the options beforehand and thought it was all pretty vile. I ended up buying dehydrated food and making my own meals… and so FIREPOT began. In the early days I handmade food which tasted good, but it needed to boil for 10 minutes, which uses loads of fuel. We continued working on it, throwing away more recipes than we used and buying in new dryers to get it right. Then last year we decided to go commercial; we set up the business, bought all the machines before Christmas and launched on the 12th March. It’s full-on, but it’s working so far.

For most people the thought of dehydrated food is enough to stay indoors – can you provide some FIREPOT tasting notes to the uninitiated?

The real FIREPOT difference is that we’re the only company to sell dehydrated food – everything else out there is freeze-dried (a popular method in 50’s America in the space race). There’s nothing wrong with it, but there’s been a real laziness and use of bad ingredients, all chucked together without giving the flavours a chance to combine. You’ll get a good shelf life, but it’s packed with preservatives and added salt, tasting very metallic with no texture. It’s as if food for explorers is stuck in the 70’s, when British food was notoriously appalling.

The preconception of camping food was a very low one and that’s been one of our challenges; to re-educate people that it doesn’t have to be a horrible experience. Our method is gentle, no extreme temperature changes, so the flavour, and most importantly texture, comes across. You’re not getting a pouch of mush! Take our Posh Pork & Beans (minced pork and beans in a spicy tomato sauce) – it takes 3.5 hours to cook and we are obsessed with getting it deliciously flavourful. We blend different beans to get a number of textures (Borlotti are coarse and chewy, haricot give a thicker source), so each recipe has been carefully concocted for the various textures to really stand out. 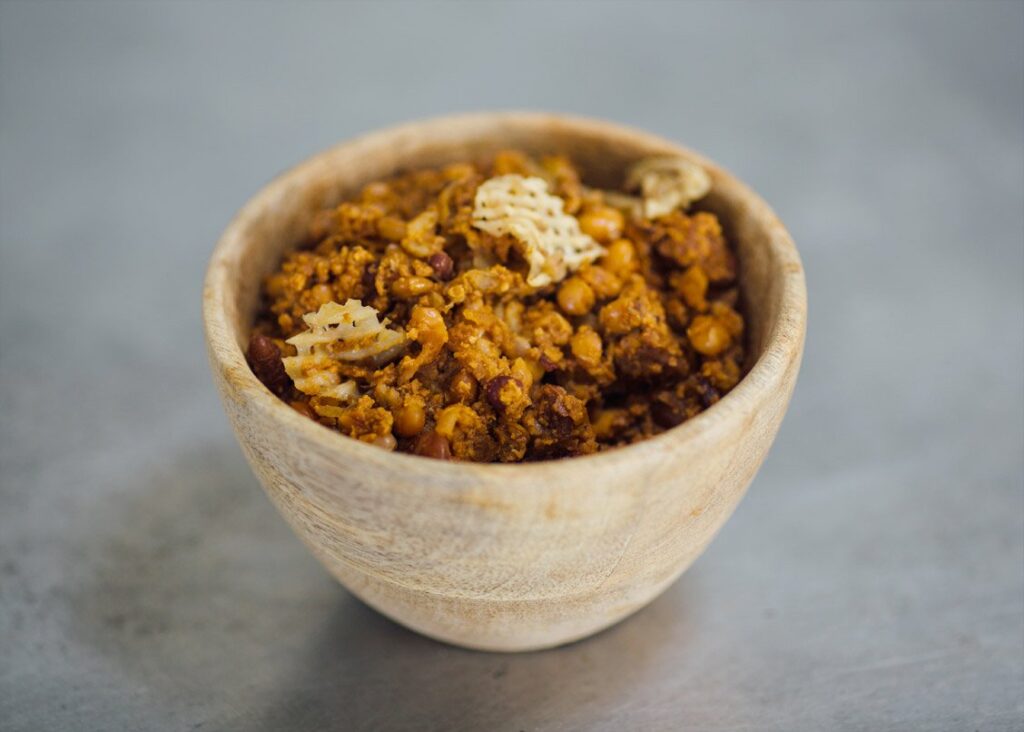 I can actually see our green grocer from the kitchen here, half a mile away! They come each day (we don’t have a freezer), so all our produce is local and freshly prepared daily. Our beef comes from the butcher who I’ve been shopping with for 20 years. Guaranteeing natural ingredients is what separates us from the rest. And we’re fairly fixated on finding the best possible products with no chemicals or preservatives. 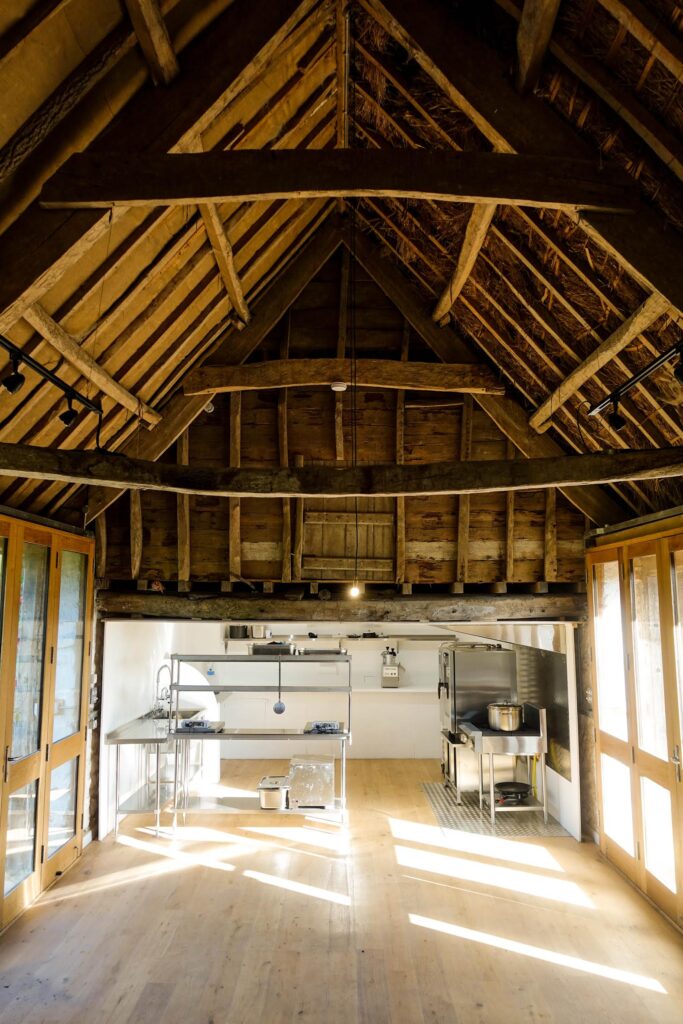 What’s the best and worst food you’ve tasted in the wild?

I spent last summer in Siberia where my wife is writing a book – the food there is indescribably bad! You get these Russian dumpling dishes where you never know if you’re getting something the size of a 10 pence coin or a Cornish pasty… and someone will come out of the kitchen with a mountain of greasy horse meat or mutton, not nice at all. The food in Mongolia is also pretty bad – I ate Marmot there, a type of rat which I think has now been banned as they’ve got the bubonic plague! Eating guinea pig in South America (‘Cuy’), whilst a bit weird, tasted pretty amazing. So I suppose I’ve tasted different rodents around the world.

When Robert Swan first went to Antarctica he spent a whole winter surviving off the canned food that Robert Scott had left there 75 years before. Suppose we create a time capsule – would FIREPOT stand the test?

We could try it! Officially our sell by date is two years, but 75 years… that might push it. Imagine though, Scott would have been eating food in tin cans containing lead – pretty dodgy stuff. The main dish that explorers used to eat to survive in the Arctic/Antarctic, Pemmican, is basically boiled blubber and hard biscuits – made for endurance but not great to taste. So the concept is extremely different. I’m actually about to pack up 150 meals to be sent to a guy heading to Antarctica next week. He’s going to be dining very well in comparison! But food is a major part of your day when you’re hiking as you spend all day thinking and talking about dinner; looking forward to that break, warmth and respite, which you’ve earned. It makes a huge difference to have something delicious to look forward to. 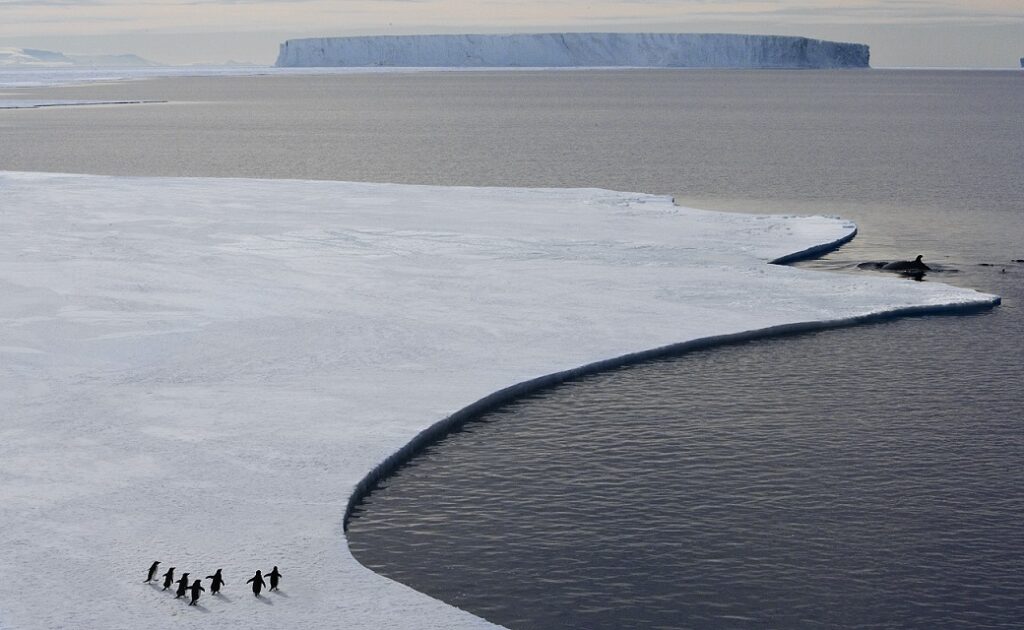 What for you defines the ultimate outdoor adventure?

I was back in Greenland two weeks ago and loved being completely cut off from everything. There are places you can walk for 6-8 days where you might cross paths with 10 people a day. But then in Greenland the real difference is that you can totally disappear. We only saw one guy, a local Inuit hunter, on our whole trip – he walked past us on day 3 without saying anything. There’s no litter, the paths are completely untrodden and there are no campsites. You’re really cut off and it’s beautiful. I don’t do anything like extreme climbing, but I love hiking.

Who would you most like to meet half way up a mountain chomping on FIREPOT’s Orzo Pasta Bolognese?

Elvis – can I say that?! In Greenland I spotted someone carrying FIREPOT and that was a major moment for me. When you’ve set up a company and then you just see your product sticking out the top of someone’s rucksack – that’s amazing. So really a total stranger is as good as anyone. Plus, I’d probably know of any explorers using FIREPOT as I’d have packaged it up and sent it to them already! 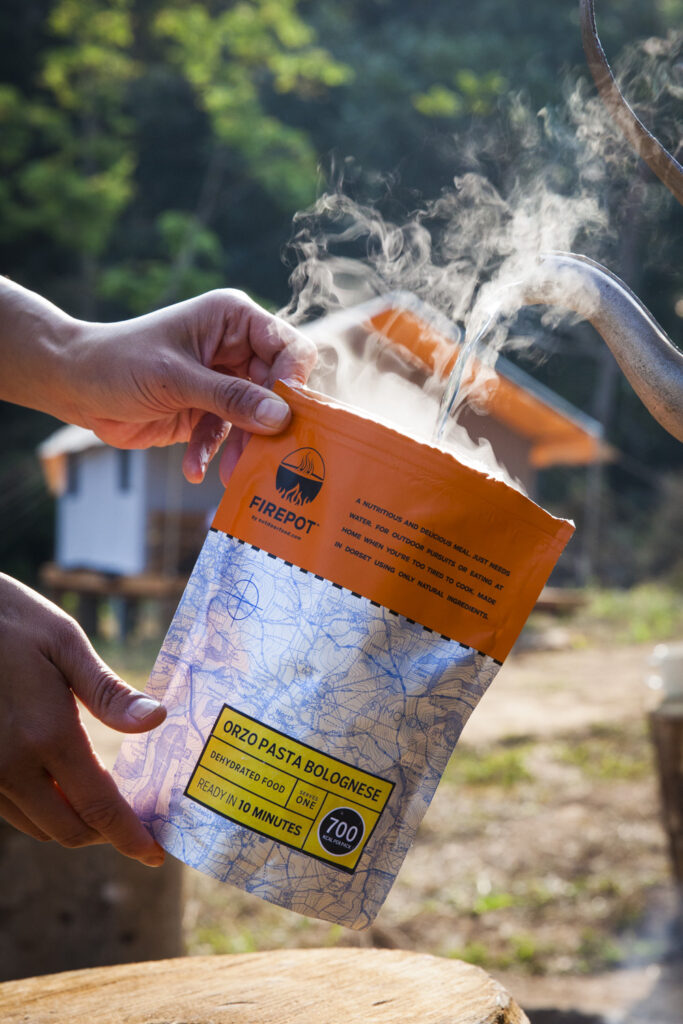 Other than a generous FIREPOT supply, what can’t you live without on your travels?

I always take a small bag of chili as I like my food spicier than most people. That’s personal taste and I guess some people won’t travel anywhere without salt. Miso soup is great at any time of day or night – a good pick me up. The Japanese will have it for breakfast and it gives a bit of a salty hit, kind of like rehydration sachets! But it’s very warming and light to carry, perfect on an expedition.

What next for FIREPOT? Can we expect to see a dehydrated full Sunday roast? Chief supplier to NASA?

Have you heard of the Christmas Tinner? You can buy it online, your whole Christmas day packed into one tin. I’m not sure if it’s a joke, but it includes a fry up, mince pies – the works. Well, we’re not going to do that! We just won a food award which is very exciting – The Seed Fund’s 2017 award for innovative British food start-ups. We’ll receive a year of marketing and branding support, putting a lot of work into the website and logo and consulting on production, health etc. It’ll be a big year of change and we want to make the packaging perfect; it’s good now, but we want it to be usable with gloves, in the dark or in a rain storm – bomb proof, basically. We’re also working on FIREPOT breakfasts, and we have two new recipes launching next month; a noodle dish and a beef stew. And we’ll hopefully expand into more countries as enquiries continue to roll in from the U.S. and Canada – a busy year ahead!

Keen to taste FIREPOT for yourself? Tag #RoamSouth & #FuelledbyFirepot with a picture of you on an adventure that deserves a tasty FIREPOT meal and we’ll send the winner a week’s supply (7 meals)!

CONTACT OUR LATIN AMERICA SPECIALISTS TO PLAN YOUR JOURNEY